Where in the world is Mabel? Topkapı Palace, Istanbul. 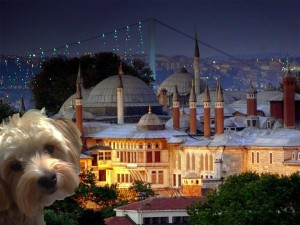 Mabel is in Istanbul at the Topkapı Palace.

Sultan Mehmed II built the Topkapı Palace after he conquered Constantinople in 1453. The palace is impressive not only for its size, but also its importance in history, especially for the Ottoman Empire between the years 1478-1856. It was the official center and home to the sultan for 380 years.

Topkapı consists of tree- shaded courtyards, each serving a different purpose and opening onto one another with monumental gates. Functional buildings surround the courtyards. From the time of its construction, the palace developed constantly with alterations and additions made by each sultan.  When the sultans moved to the ostentatious Dolmabahçe Palace in 1853, Topkapı lost its importance as the official royal residence and was left to deteriorate. It finally regained its former unpretentious beauty after fifty years of continuous restoration in the Republican era. Most of the objects exhibited in the palace today are unique masterpieces.

Topkapı is the largest and oldest palace in the world to survive to our day. In 1924 it was turned into a museum at Atatiirk’s request. Situated on the acropolis, the site of the first settlement in Istanbul, it commands an impressive view of the Golden Horn, the Bosphorus and the Sea of Marmara. The palace is a complex surrounded by 5 km of walls and occupies an area of 700,000 sq. m at the tip of the historical peninsula. When it was used as a palace, it served more functions than one usually associates with royal residences. Although it was the residence of the Sultan, the sole ruler of the empire, it was at the same time the center of the administrative affairs, the place where the council of ministers met, and the treasury, mint, and state archives were located there. The highest educational institution of the empire, the university of the sultan and the state was also here. Therefore it was the heart, the brain, and the very center of the Ottoman Empire. Much later, the harem (private quarters) of the sultans was moved here too.

Of the sixteen empires founded by the Turks, the Ottoman Empire was the longest lasting and the largest. It lasted for 622 years ruling over the Asian, European and African lands surrounding the Mediterranean and the Black Sea. Peoples of different races and religions were united under its rule. The only other empire in history that governed such vast lands for such a long period was the Roman Empire.  Thirty-six sultans reigned during this period, and starting from early 16th century, they also became the religious leaders of the Islamic world as caliphs.

Istanbul, formerly known as Constantinople, is the only city in the world that straddles two continents: Asia and Europe. While not the capital, Istanbul is Turkey’s largest city with a population of about 13 million.

Turkish is the official language of Istanbul, Turkey and the Turkish Republic of Northern Cyprus. The large Kurdish minority also speaks Kurdish. English is also widely spoken in Istanbul, which often surprises its visitors.

If you are looking to communicate with clients in Turkish, give INGCO International a call! We would love to assist you.