Where in the world is Mabel? Mount Rushmore! 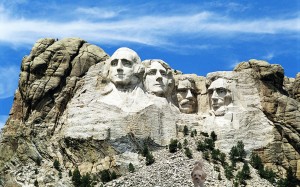 She is at Mount Rushmore National Memorial, South Dakota.

Mount Rushmore, the President’s Mountain, is located in the Black Hills of South Dakota. This iconic site houses a series of four sculptures depicting the faces of U.S. Presidents George Washington, Thomas Jefferson, Abraham Lincoln and Theodore Roosevelt. Led by the sculptor Gutzon Borglum, work on the project began in 1927 and was finally completed in 1941. Over the span of that time over 400 workers erected the sculpture removing a total of 450,000 tons of rock in order to create the enormous carved heads which reach a height of 60 feet.

Mount Rushmore was named after the lawyer Charles E. Rushmore, who traveled to the Black Hills in 1884 to inspect mining claims in the region. When Rushmore asked a local man the name of a nearby mountain, he reportedly replied that it had never been named before, but from that point forward would be known as Rushmore Peak (later Rushmore Mountain or Mount Rushmore).

The territory that would become South Dakota was added to the United States in 1803 as part of the Louisiana Purchase. The first permanent American settlement was established at Fort Pierre by the Lewis and Clark expedition in 1804.White settlement of the territory in the 1800s led to clashes with the Sioux, as some of the land had been granted to the tribe by an earlier treaty. Nevertheless, the territory was incorporated into the union on November 2, 1889, along with North Dakota. Due to a controversy over which state would be admitted to the union first, President Benjamin Harrison shuffled the bills and signed one at random, with the order going unrecorded, though North Dakota is traditionally listed first. Today, a major part of South Dakota’s economy is fueled by tourism–visitors flock to the state to see Mt. Rushmore. Famous South Dakotans include newscaster Tom Brokaw, senator and vice president Hubert Humphrey and model-actress Cheryl Ladd.

Prior to becoming a part of the United States South Dakota was inhabited by Native Americans. The Arikara people dominated South Dakota up until the 1700s when the Sioux arrived and drove the Arikara from the area and inhabited it themselves.

The Sioux Indians came to North America from the continent of Asia about 30,000 years ago. The name Sioux means “little snake”, which was given to the tribe by the Chippewa Indians. Generally, the Sioux Indians were nomadic, meaning that they never really stayed in one place for a long amount of time. They typically followed the pattern of the buffalo, assuring them that there would be food and clothing wherever they traveled.