Where in the world is Mabel? Wimbledon, London!

Can you guess where Mabel is this Monday? 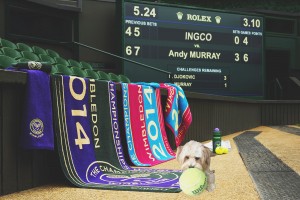 She is at the Wimbledon Tennis Championships in London.

The Wimbledon Championships, or simply Wimbledon is the oldest tennis tournament in the world, and is widely considered the most prestigious. It is also the only court in the four Grand Slam tennis tournaments (majors) that still uses the game’s original surface, grass (as opposed to plexicusion).

The tournament takes place over two weeks in late June and early July, this year the tournament begins on June 23 (today) and will have matches until the 6th of July. It is culminated with the Ladies’ and Gentlemen’s Singles Final, scheduled for the second Saturday and Sunday respectively. Each year five major, junior, and invitational events are held.

London is made up of two ancient cities, which are now joined together. The first is the City of London; known as ‘The City’ the second is the City of Westminster. These two joined cities make London the largest in Britain and Europe occupying over 620 square miles.

Buckingham Palace, located in London, has served as the official London residence of Britain’s sovereigns since 1837 and today is the administrative headquarters of the Monarch. Buckingham Palace houses offices of those who support the day-to-day activities of The Queen, Elizabeth II, and The Duke of Edinburgh and their immediate family.

The Queen II has become the second-longest reigning monarch in 1,000 years of British history. She has now overtaken George the III, who reigned for 59 years, 96 days and 13 extra leap-year days. Queen Elizabeth II, the eldest daughter of King George VI and Queen Elizabeth II was born in 1926 and became Queen at the age of 25. Now age 88, the Queen has reigned through more than 5 decades of enormous social change and development.

Britain’s main language is English (British English) although Queen Elizabeth II speaks fluent French and often uses the language for Audiences and State Visits. Her Majesty does not require an interpreter.

Below are some differences between American English and British English word choices:

If you are looking for interpreting, translation, or global marketing services give INGCO International a call!