Where in the world is Mabel? Germany! 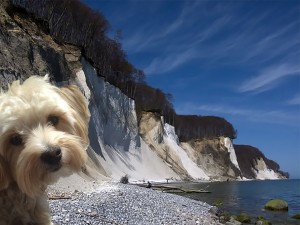 She is at the Chalk cliffs of Germany in Jasmund National Park.

The chalk cliffs on Germany’s Rügen Island rise 330 feet or more over the Baltic Sea. These ancient structures are made almost entirely of the skeletons of calcite-covered plankton called coccolithophores, deposited by the trillions during the Cretaceous period. Sediments like these actually give the Cretaceous its name: Creta means “chalk” in Latin.

Not surprisingly, German is the official language in Germany. It is also the most widely spoken one in that country. The German language is also commonly spoken in Austria and Switzerland.

It is a significant language beyond Germany as well, with up to 100 million native speakers and about 80 million non-native speakers around the globe (especially language students in France and Eastern Europe.) Additionally, German is an official language of the European Union and one of the three working languages of the European Commission. Over 15% of all EU nationals speak the German language.

Although German is the official language of Germany,. Actually, there is more than one protected minority language in Germany: Danish, Frisian, Romany, and Sorbian.

Germany’s long history dates back to the early Middle Ages: The first texts in Old German (a form modern speakers would not recognize) come from the 9th century AD. The modern language in Germany didn’t develop until the 1700s.

Linguistically, German belongs to the so-called West Germanic branch of the Indo-European language family. Its closest “relatives” are English and Dutch. However, the differences found among these languages is significantly greater than most know.

Here are some common phrases in German:

If you are looking to communicate with your clients in German, give INGCO International a call! We provide German interpreters, translations, and global marketing services.