Your joke is not funny. 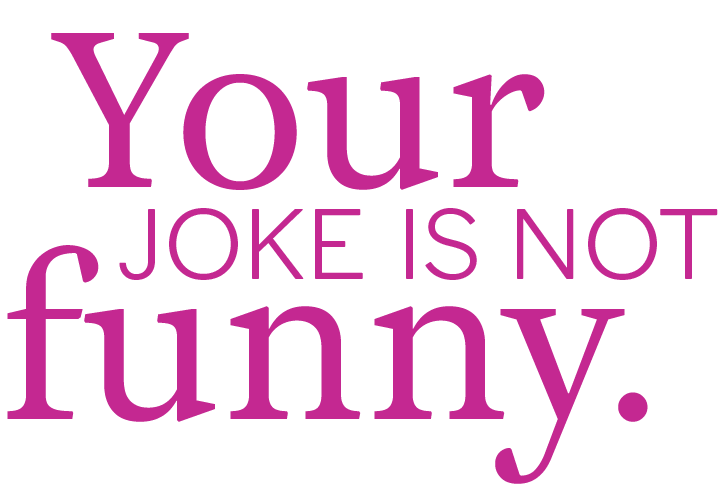 Your joke is not funny. To clarify: it actually may be funny, but once translated to another language, it’s not funny.

Free lesson from your translator:

Jokes are better off left at home because your joke is not funny.

When I am interpreting and I need to translate your joke on the fly to another language, it loses nearly all humorous undertones. Humor plays an important part in communication but when communicating via an interpreter, the punchline ends up in the punch bowl. Humor is often used to break the ice but looking for better ways of breaking the ice when you are communicating via an interpreter is essential. When you leave it up to me to come up with an equivalent of your joke in another language on the fly, be prepared for the audience to be less than dazzled.

Let me tell you that from personal experience, coming up with a joke on the fly is really not my skill set.

Asking me to translate your joke on the fly? Not funny.

Jokes need to be understood quickly, especially when they present an extreme degree of linguistic difficulty or have personal or cultural roots. In the throws of simultaneous interpreting, understanding the joke needs to occur instantaneously and then crafted into the target language instantaneously in a way that the audience will connect with. Jokes are laden with double entendres and cultural nuances that your interpreter will understand, but translating that to your audience’s language is a tricky task.

Jokes are relative and joke translation is tricky — and it tends to make for more confusion than laughs. Ensuring that a joke survives in another language is an absolute up-hill battle. When you have to explain the punchline, it’s no longer funny.

Knowledge of languages is not enough; as interpreters, we must also have insight into the cultural and even personal dynamics underlying the speaker’s words. We interpreters work not just with words and concepts, but also with ideas and emotions that beg to be freed from the straitjacket of literal translation. While interpreting, we tend to “become” the speaker so that the audience can fully grasp the message.

When the interpreter is being propelled forward by the non-stop demands of simultaneous interpretation, all of her imagination is called on to surmount any challenges that unexpectedly crop up. Jokes fit into the “imagination overload” section of the brain and you will end up the brunt of the joke with glazed over “your joke is not funny” looks from the audience.

Jokes get lost in translation. Take it from me — leave the jokes for the Friday night get-together and wow your audience with sincerity and knowledge instead.

INGCO International is an international communications leader providing translation, interpreting and global marketing services in over 200 languages. All jokes aside, we’d love to connect with you about your translation needs and look forward to hearing from you soon.