Where in the world is Mabel? Cambodia 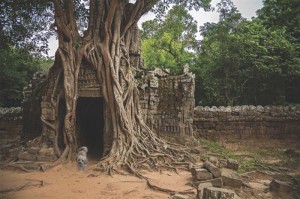 Mabel is at Angkor!

Angkor is an archaeological site in Cambodia’s northern province of Siem Reap. It extends over 400 square kilometers and consists of numerous temples, hydraulic structures (basins, dykes, reservoirs, canals) as well as communication routes. The architecture and layout of its successive capitals bear witness to a high level of social order and ranking within the Khmer Empire. This site, therefore, exemplifies culture, religious and symbolic values, as well as archaeological and artistic significance.

The official language of Cambodia is Khmer. Khmer is an inherited language–with application of Indic languages: Pali and Sanskrit from India. Also, the Khmer language is influenced by spoken and written Thai. Some technical languages of Khmer are borrowed from French as well.

Words and phrases in Khmer:

If you need to communicate with a client in Khmer give INGCO International a call!